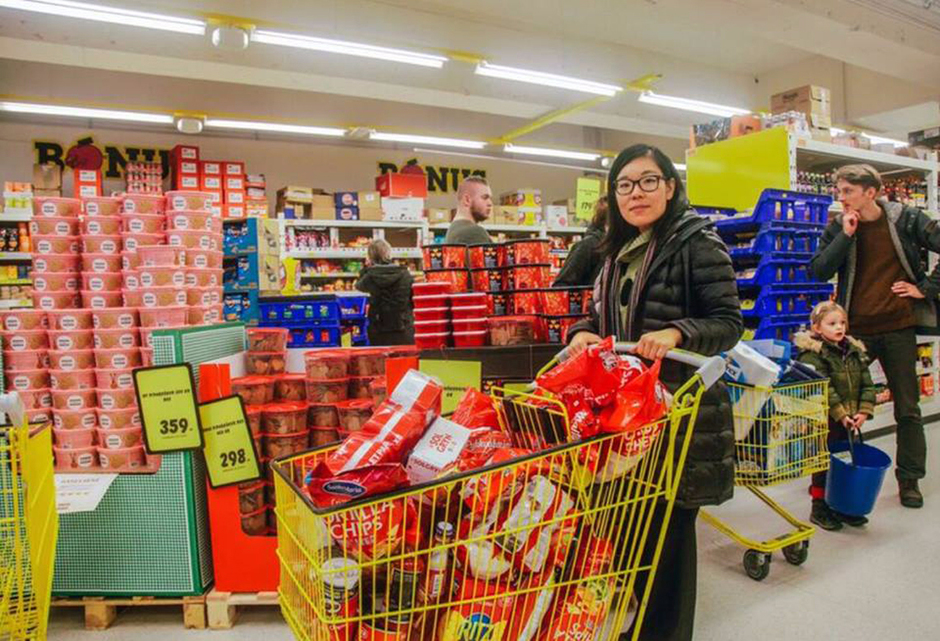 Join us on Saturday, January 19, 2019, for Carolyn Chen’s This is a Scream at Radius Gallery in Santa Cruz.

L: When did you first become self-aware of your voice and its particular characteristics?

C: I think growing up speaking Mandarin at home and English at school made me conscious from an early age of having a different vocal personality and I think part of that division was part of why I was so quiet, just the tension of moving between those different environments. I remember my mom teaching me phonics in Chinese before I learned it in English and I was sitting on the toilet and she was sounding out the word for “pee” and that was when I finally got it: that everything that I could think of to name had sound components and it was an amazing discovery. I do feel like I’ve been coached on my voice a lot in my life. I don’t think of there being one single, natural voice that is intrinsically my own. I really feel like in the different environments that I’ve encountered there have been really different standards for verbal discourse and vocal participation and maybe because of the language thing I’ve been more conscious of having to adapt to different environments and of the difficulty of adapting to some environments more than others.

L: Has this piece changed your relationship with your voice?

C: The personality that I write about in the piece is being introverted and not being able to be heard, so then I have at points wondered, does my scream sound too loud to be somebody who’s not an expert screamer because I’ve done this piece a few times now? But realistically speaking, I don’t have the best scream, it’s not a real danger. My favorite part is the interview with my parents, and every time I hear my dad imitating his own scream it’s both really funny and there’s a lot of pathos, it’s soo quiet and his personality – I think my personality is like his but he’s more extreme – and then I just realize that neither of us is in grave danger of appearing overly expert at screaming. There’s always just too much personality to get out of the way.

L: How does screaming relate to language? to “language as a wilderness?”

C: I think the scream is an endpoint of language. It’s an extreme vocal expression that appears to be beyond language, and that was part of the attraction, is that it’s so expressive without needing words. But then, going into the investigation of these particular screams and where they come from, it does seem to be very clearly culturally situated. I think when I started, the process of researching this thing was sort of like taking the scream as a kind of wilderness and trying to travel through these different parts of it and to uncover what was in the undergrowth of the sound and why it sounds the way it does. To me, more than sound, the basic substance of music is about energy and how that’s conveyed, and it usually has something to do with sound, but I don’t think the sound in itself is the main point. It’s about our relationship to it, and its relationship to us, and describing it in energy gets a little bit closer to the heart of it.

L: When do you feel loud?

C: In yoga, when we do handstands, or a backbend, I think that feels pretty loud. Your blood is pumping, but it’s a comfortable loudness because I’m comfortable in the sustains, and navigating and negotiating the sustain of it, as opposed to the attack, which was never my strong suit. Or sometimes the world is really loud, and you feel so much a part of it: you are in the world and everything is loud, everything is full. Sometimes when the sunsets are really cheezy, I guess. Unnatural colors that are really garish. And then, in music, in classical music you get these instructions, so you don’t have to necessarily identify with the loudness first hand, a priori. You get the instruction and its your job, right? And sometimes that’s nice, to have a small platform to do the thing you wouldn’t otherwise do. I guess loudness, it’s a little about being seen, or being unafraid of being seen or heard. and I think probably my default position is to be comfortable not being seen, unless I’m with my friends. ❦